When citing or referring please provide this DOI:10.6084/m9.figshare.6714038nnRecently, I gathered data from the Bielefeld Search Engine BASE on the percentage of journal articles, books and doctoral theses published Open Access, licensed under Creative Commons Licenses and under Open License between 2013 to 2017.nnSince dissertations have been published electronically and Open Access for a long time, they have traditionally been a document type that was more Open Science compliant than others. For example, the Open Access repository software OPUS, which is widely used in Germany, was in earlier years used exclusively for the electronic publication of doctoral theses. Unfortunately, this pioneering role could not be held: A look at the data provided by BASE shows that the Open Science penetration among theses published stagnates.  BASE knows three categories of accessibility: Open Access, Unknown, Non Open Access. In the following tables and graphs, figures reported as „Open Access“ have been categorised by BASE as Open Access. The following tables show data from BASE as follows:n

nOpen Licenses means licenses that fulfill the requirements of the Open Definition. This applies only to two Creative Commons licenses: CC-BY and CC-BY-SA.n 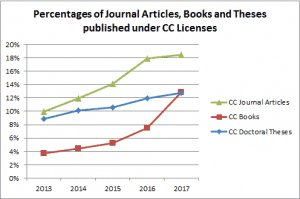